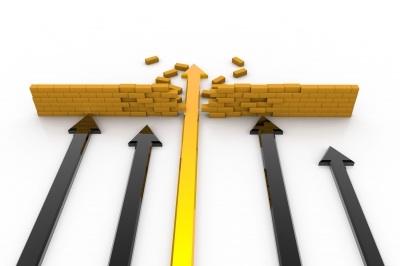 A few months ago, I read a book that resonated with me in a big way. It’s called The Last Lecture and was written by Randy Pausch, a professor, researcher and mentor at Carnegie Mellon University.

The book is based on Randy’s last lecture, “Really Achieving Your Childhood Dreams”. Sadly, Randy lost his battle with pancreatic cancer in 2008. In his short life, however, he achieved many of his childhood dreams and has inspired millions to strive to achieve theirs.

Randy came to mind today as I sat pondering what I’ve achieved so far, some next steps, and what it will take to make my dreams come true. I’ve mapped out some pretty significant goals, worked with a great NLP-based coach to make progress in eliminating my limiting beliefs and negative emotions, and as I put everything into practice, the enormity of everything I want to do has suddenly stopped me in my tracks.

Because there it is. Right in front of me: The Big Scary Wall of Self-Doubt.

And on the other side: my heart’s desires.

When I’ve reached this point of self-doubt in the past, there were times when I summoned my strength, ignored the possibility of not succeeding, faced my fears and did it anyway.

Then there were the other times – when I threw my hands up, waved the white flag and closed the chapter on what might have been.

Why the difference – why do we sometimes give up and other times give it all we’ve got?

Does it really come down to how badly we want something? Looks like it. There are so many examples of accomplished people who faced the odds and through sheer determination and desire made things happen.

So here I am, facing the brick wall again.

Am I driven enough to silence the questioning self-talk? Can I get past the doubt? What will it take to get what I want and either break through that wall or vault over it, Navy Seal-style, to the other side?

I’m putting on my helmet and elbow pads. I’m armed with clear, vivid, Technicolor images of what I will see, hear, feel and do when I reach my goals. And I’m taking a run at it.

How badly do you want to achieve something? Will the brick wall keep you out?

Or will I see you on the other side?